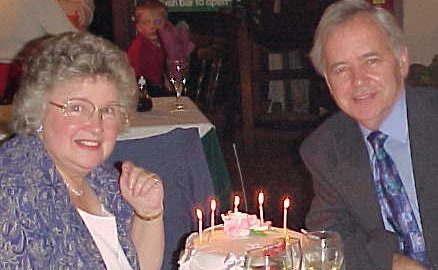 Maureen and Stuart Horner of the Kinderhorn Norwegian Elkhounds purchased their first elkhound, Taroscken Tina (Tara), in 1978. They joined the British Elkhound Club (later the Norwegian Elkhound Club of Great Britain) in the same year. To date they have owned or bred six UK Champions and currently own one bitch (Bella), from a line which they have owned through three generations (with a fourth being resident at Conrick) and also co-own and campaign a very beautiful male import (Kobi), who gained his UK title in 2017.

Five litters carried the affix Kinderhorn.Two dogs from these litters became Champions. Maureen and Stuart are now retired from breeding. Even though not breeding themselves, Maureen's skills at the side of the whelping box are still in demand and help will always be given to novice breeders of the Norwegian elkhound.

Stuart awards Challenge Certificates in elkhounds, and most recently judged at Bath (in 2018).

The Horners have attended shows in the UK, Ireland, the USA and Scandinavia.

The Horners live in New Mills at the edge of England's beautiful Peak District, surrounded by open countryside just perfect for dog walking!

Stuart is a keen photogapher, and his photos have adorned many a Club Journal and website, both here and abroad. You can see some of Stuart's masterpieces in our Photo Gallery.

The affix Kinderhorn was granted by the Kennel Club in 1980. 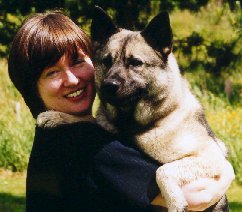 Vanessa McHugh is the Horners' daughter, and so grew up alongside several members of this handsome Nordic breed. She was given her first dog, Barlestone Henrik (Roo), a few weeks after her 21st birthday. She currently has one 4 old dog, Kinderhorn Espen of Conrick (Gunnar), and she also co-owns an imported bitch, Am Ch Kamgaard Kiamesha (Siri), with a friend. She is looking to add to her canine family in the next few months. Previously, she was the owner of Ch Kinderhorn Dain of Conrick JW ShCM (Raider), one of the top-winning dogs of the last decade, and she also was a member of a syndicate which co-owned the multi-titled Champion dog, Camalot's Faithful Knight JW ShCM, who has had a good deal of success both in the UK and overseas.

Other dear friends in past years were her beloved rescue, Barlestone Henrik (Roo), Naraena Knut av Conrick (Ekko) and her dear old lady, Barlestone Nussi of Conrick (Spooky), who is behind many winners in today's UK showring.

She bred two litters under her own affix, as well as being part of the establishment at Kinderhorn, but is taking a break for the time being to concentrate on professional matters. In 2015, she co-bred a litter under the Grasilva affix, from which came the champion male Ch Grasilva Little Rock Avec Gilkaro JW.

She has attended shows in the UK, Ireland, the USA, Sweden and Norway.

She was also lucky enough to be invited to go hunting in Norway during the 2005 season. Over 2 days, she joined a hunting party in the wilderness above Gjøvik with a løshund.

Her sons, Paddy and Conor, enjoyed the dogs as much as any young person can be expected to, fulfiling the function of winter warmer on the couch. Conor had previously done well in Junior Handling, winning the NECGB Trophy for Top Junior Handler four times, three of those years consecutively.

The affix Conrick was granted by the Kennel Club in 1998.